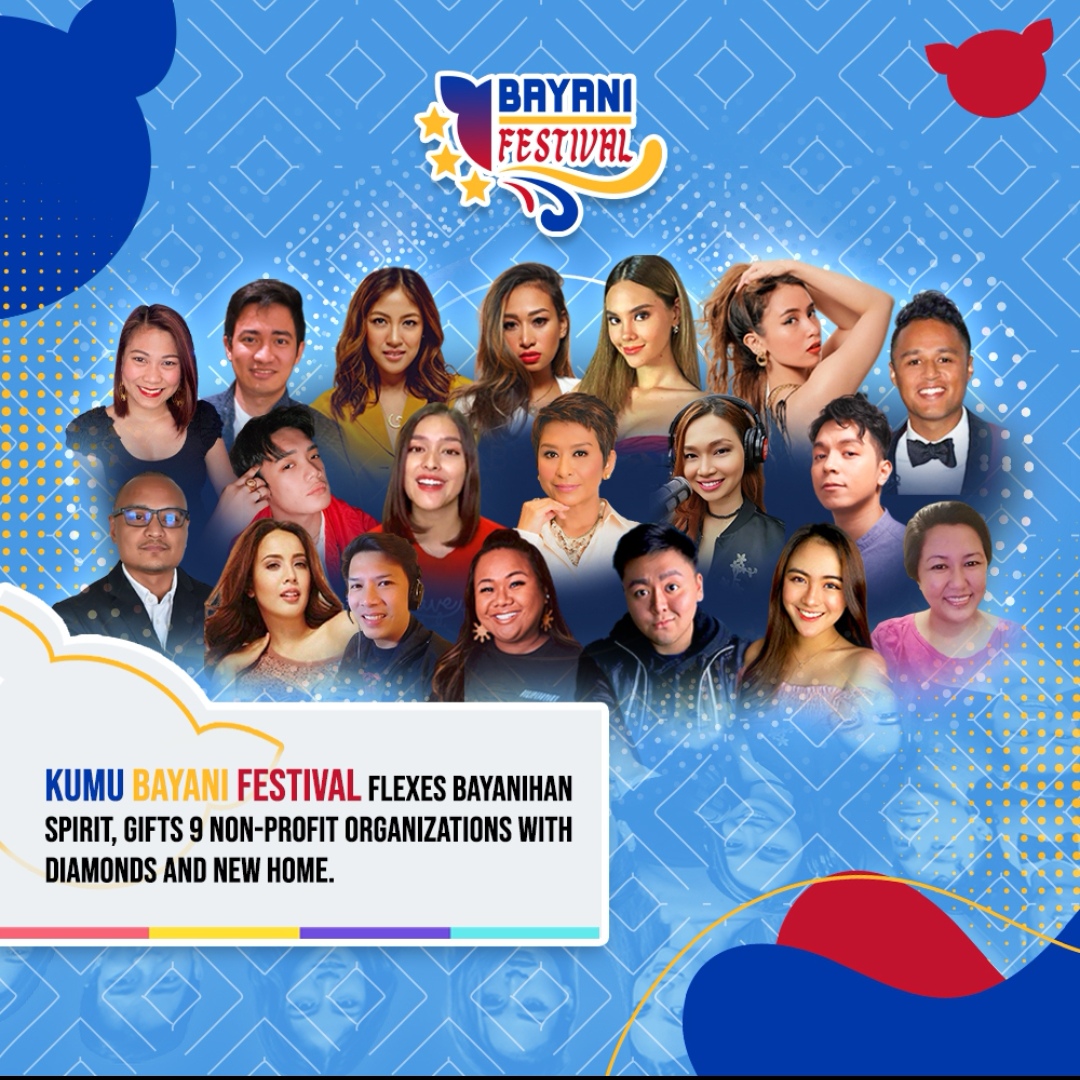 “If you could redefine a popular preconception in today’s society, what would it be and how would you redefine it?”

A question asked by Ms. Universe 2018, Catriona Grey at the first ever search for Kumu Bayani Festival King & Queen, where JC Santos, a hotel manager in Australia representing the non-profit organization For Our Farmers PH, and Margeaux Cadavez, a model-student representing the mobile-outreach group Manila Street Love, emerged as the Bayani Festival King and Queen 2021, respectively.

The third crown landed on the articulate John Fred Marc, a scholar from Pampanga representing Tech for Filipino Youth, earning him the title, Bayani Festival Royalty 2021.

Almost a hundred thousand in attendance, 70 hosts and performers, 25 events, 18 teams and pageant aspirants in the running for premiere titles under the spotlight of Kumu Bayani Festival 2021 – the first ever festival of social causes in partnership and for the benefit of nine charitable organizations.

Among the partners were Save The Children Philippines, Theater Actors Guild, World Wide Fund for Nature PH, Waves for Water PH, Manila Street Love, Mano Amiga PH, Campaign One At A Time, For Our Farmers PH, and Tech For Filipino Youth.

Actress and Save The Children’s Liza Soberano lit the virtual stage with an inspiring message on the kick off event last July 23. And on Sept. 12,  the Kumunity Stage was decorated once again for a thanksgiving concert capping the 8-week long festival which featured various celebrities and advocates in the name of bayanihan spirit. The concert was filled with gratitude, recognitions, give-aways from sponsors such as H-Audio Technologies, Let’s Radiate Mare, joyinabottleph, Ellana Mineral Cosmetics, Papa Recipe, and Mizumi. In between was of course lots of live music!

Apart from a new-found purpose and connections built, Diana broke the good news that the benefit festival raised more than 10 million diamonds, or about Php 200,000 in pesos. Said amount will be turned over to the organizations.

Langit Lupa was one of the featured games at the Palarong Pinoy, hosted by the influencer-athletes of Virtual Playground lead by volleyball superstar Carmela Tunay. The 2-hr event tested the viewers “akyatan” skills, wherein the fastest one to land on the winning virtual box wins coins – the platform’s currency. “With Palarong Pinoy, we meant to give the kumunity a real piyesta experience, albeit virtually. I had to innovate, creativity was key,” adds Diana.

Meanwhile, ten official kumu teams rounded up, rehearsed, and each put together a virtual performance that best showcased the advocacy of the organization assigned to them.  The platform saw visual artists, singers, poets, dancers, speakers, and even puppeteers during the 4 days of elimination rounds, and the championship where The Frontliners, Team Paolita, and Kampo Official rose at the top.

As music-loving Pinoys, each Festival event was filled with musical performances by premier vocalists and DJs from all over the world – Sam Mangubat, Radha, Mitzi Josh, Claire Bricencio, Team GUD, Jazze Manuel, Maffy Soler-da Roza, Keith Martin, JR Estudillo, and Bradley Holmes, among others. Every week, there were events one could watch hosted by kumu’s most engaging hosts like Tessa Albea, Alyanna Regina, Lesley Martinez, JM Punzalan, Prima Clara, and Diana Dayao who’s a multimedia host and recording artist herself.

“We set an example for our non-profit organization partners and showed them the power of Kumunity. In the end, everybody discovered a new home, new skills, and a new purpose. Beyond fundraising, the most amazing feedback from most participants really was the connection and the journey throughout the festival,” Dayao beams.

What participants have to say

“Here in the States (US) we don’t have a lot of festivals like this and to be able to see it successfully come out virtually and say I was a part of it is an amazing feeling that I will cherish forever. Thank you Bayani Festival for making me more confident about my Filipino identity.” – Tessa Albea

“As a child rights’ advocate and ambassador of Save the Children Philippines,I am happy and grateful to kumu and the whole kumunity for staging events such as this. I know that through our collective actions we can make a difference in the lives of many Filipinos.” – Liza Soberano

“I really loved creating content and this is one of my favorite shows because we were able to help people.” – Jazze Manuel

Let’s be honest, at first it was all for exposure, but knowing that proceeds of this event will go to a good cause really pushed me to say yes to these types of events. 9 super worthy non-profit organizations were part of this event so being able to help them raise funds really is motivating.” – JM Punzalan

“I liked the games part (Palarong Pinoy). Everybody was joining not for the win, but for fun and for a common cause and that’s to be able to help in Kumu Bayani’s advocacy.” – Krista Maria

“KBF was fun and fulfilling event. It not only gave me joy but it gave me a bigger purpose as a streamer, I enjoyed the games and the performances because the audience were really appreciative of the contents that we were showing.” – Box Seblario

” Festivals like this allow me to meet more people and get to know more about them. I always say that Kumu made the impossible possible by bridging the gap and by becoming an instrument of togetherness most especially through this pandemic.” – Maffy Soler